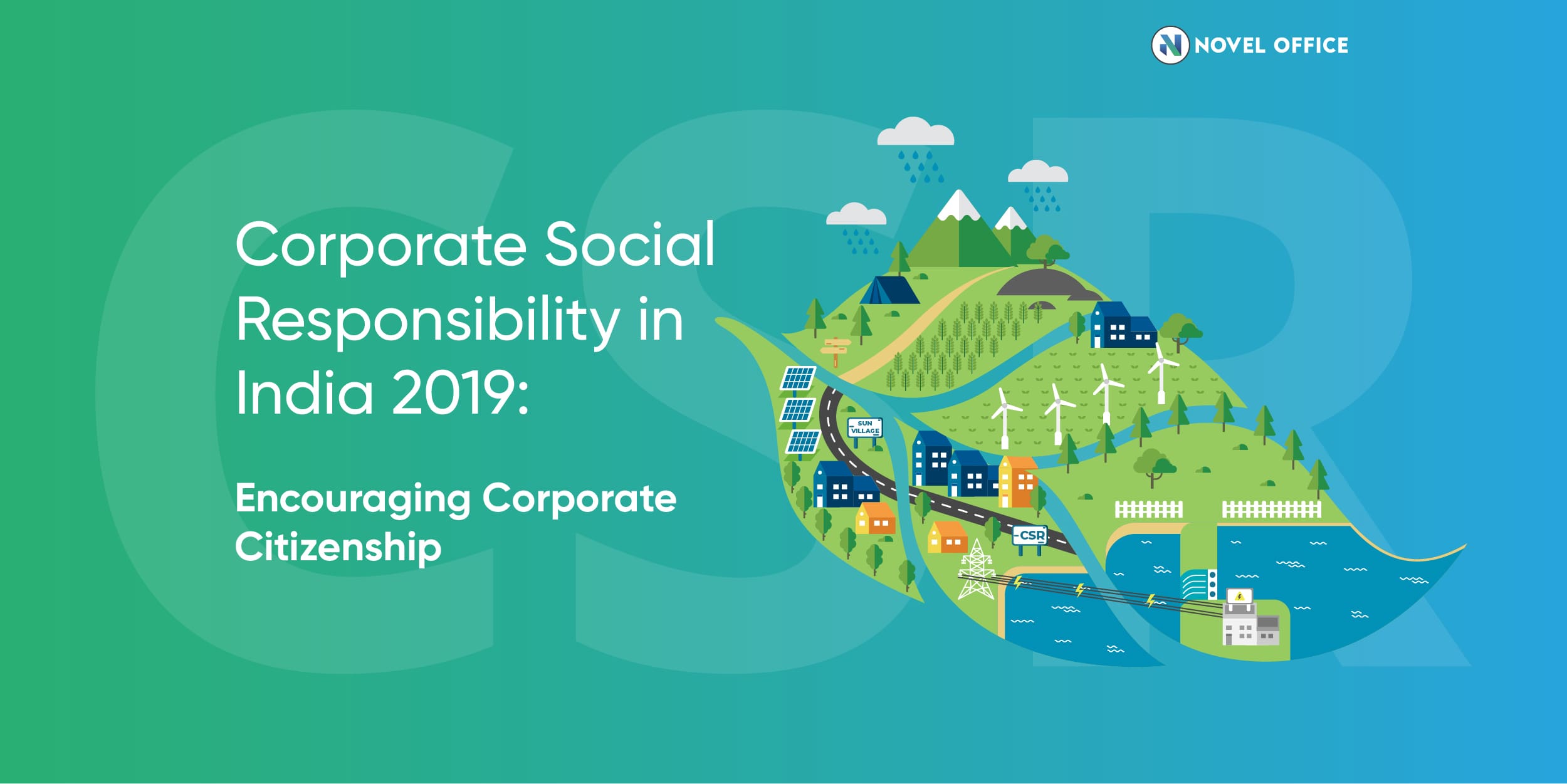 With more than 450+ sections, 7 schedules, and 29 chapters, the Company Act 2013 received the assent of the President of India – Mr. Pranab Mukherjee on 29th August 2013, which was notified through the Official Gazette on 30th August 2013.

The Company Act 2013 introduced many new concepts to the Indian corporate world, but it also eliminated a few flexibilities as well, including the choice to elect financial year other than 31st March for the companies. One of the important new concepts was the inclusion of Corporate Social Responsibility (CSR) to the Indian corporate ecosystem, making India the first country to mandate and quantify Corporate Social Responsibility expenditure globally.

The government of India aimed at facilitating the means of doing business and improving corporate governance in India with the amendment to the Company Act and making the companies more accountable for the impact they had on all aspects of the society.

“Corporate social responsibility is the continuing commitment by business to behave ethically and contribute  to economic development while improving the quality of life of the workforce and their families as well as of the local community and society at large.”

The Company Act was recently updated in 2019 with certain additional amendments that came into effect on 31st July 2019 by the assent of the Indian President, Mr. Ram Nath Kovind. At present, the Act mandates that companies with a profit of more than ₹5 crore (US $700,675), turnover of ₹1,000 crore (US $14 million), and net worth of more than ₹500 crore (US $70 million) have to spend at least two percent of their three years’ annual average net profit towards CSR activities.

While introducing the Bill, the Finance and Corporate Affairs Minister, Ms. Nirmala Sitharaman also said, “the Bill seeks to ensure more accountability and better enforcement to strengthen the corporate governance norms and compliance management incorporate the sector as enshrined in the Companies Act, 2013”.

As per the data available for the FY 2014-15 to FY 2018-19, companies with an overall expenditure of around ₹47,939 crores towards the CSR initiatives had invested ₹5,896 crores for rural developments, ₹144 crores in the area of technology incubation, ₹4,842 crores towards environmental sustainability, ₹815 crores for the protection of heritage & arts, ₹1,534 crores towards gender equality and women empowerment, ₹15,484 crores in the field of education, ₹141,094  crores towards poverty alleviation & healthcare and ₹3,116 crores for other social projects in India. 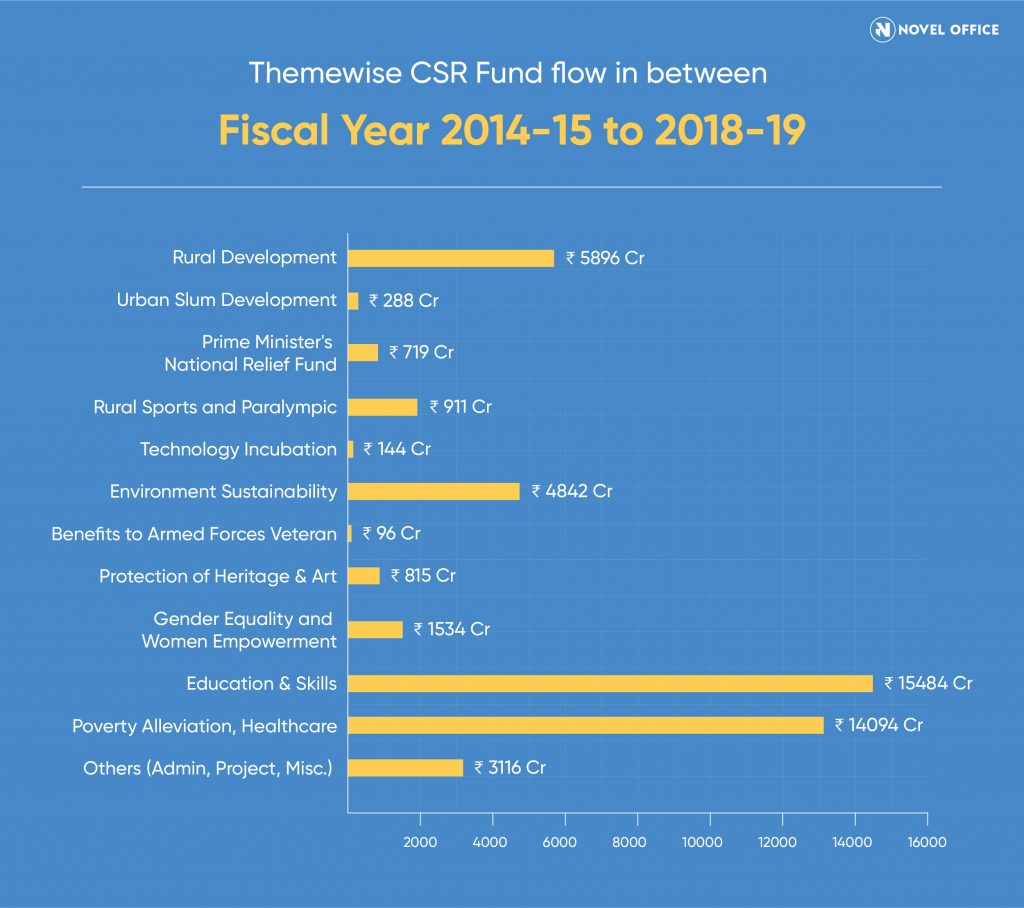 According to an update by the Economic Times, the total expenditure towards CSR programs by top companies in India was supposed to surpass ₹50,000 crores by March 2019. The companies such as Reliance Industries Limited were provided with an estimated prescribed CSR fund of ₹817 crores for the FY 2018-19, whereas, Tata Consultancy Services Limited of ₹609 crores. The table below highlights the top 20 companies of India with their prescribed CSR fund for FY 2018-19.

The year 2019 was remarkable for corporate citizenship in India. Various events & conferences such as The CSR Journal Excellence Awards, where President of India confers CSR Awards, ‘India CSR Summit & Exhibition’, and many others were organized to bring the business leaders, impact investors, board of directors, CSR foundations, philanthropists, innovators, government agencies and many non-profits leaders under single roof to discuss the challenges and innovative approaches to Corporate Social Responsibility in India.

Since the year 2019 has passed, let’s have a brief look at last year’s CSR activities, contribution & statistics of a few organizations towards the development of society across different sectors in India:

On a consolidated basis, Vedanta Limited invested ₹309 crores on CSR activities towards the social causes in the FY 2019. The Nandghar Project is among the flagship initiatives of Vedanta Limited, which aims at women’s empowerment  as well as skilling and re-building Anganwadis for ensuring the health and learning of children in rural areas of the country.

During the FY 2018-19, HIL spent ₹34 crores in its CSR initiative. HIL’s Renukoot Plant plays an exemplary role for Project Unnati that has increased crop productivity by 40%, whereas seasonal migration & unemployment in rural areas saw a drop of 50% and 80% respectively. Over 62% of the youth found employment with the support of their vocational training programs. Today, the company’s contribution towards CSR makes a difference in the lives of 1.2 million underprivileged rural populations across 21 locations in India.

ITC Limited spent ₹306.95 crores on CSR programs during FY 2018-19. With the objective to promote healthcare and sanitation, 4,443 individual household toilets were constructed across 15 states in India. Around 19.2 lakh children across 60 cities were covered under Swasth India Mission and nearly 400,000 beneficiaries were covered under the Mother and Child Health initiative. In addition, through the social forestry program, the company has covered nearly 7.33 lakh acres of land, generating employment for about 135 million people in rural areas.

Tata Chemicals Ltd. was ranked as the number one company for Sustainability & CSR practice in Responsible Business Ranking 2019.  The company spent an actual amount of ₹25.68 crores for the FY 2018-19 through its CSR initiation called BEACON, contributing towards the rural development in India. Tata Chemicals Society for Rural Development (TCSRD) also inaugurated a dry waste processing plant at Mithapur under the Swachh Bharat Abhiyan campaign for the processing of three different categories of plastic wastes that are Industrial, Municipal and Scrap.

Infosys Limited received the United Nations Global Climate Action Award in the ‘Climate Neutral Now’ for its carbon-neutral goal. The annual report for the Year 2018-19 revealed the CSR expenditure of around ₹342 crores The Infosys Foundation Trust worked towards supporting projects with non-governmental organizations as a nodal agency for implementing projects in the area of education, malnutrition, healthcare, environmental sustainability, conservation of natural resources, and rural development in India.

According to the recent article by Fortune India,in the fiscal year 2019, a staggering 93% of the companies spent on CSR activities (i.e. 1,055 of 1,132 companies). The rest of the 77 companies, didn’t spend anything on CSR despite it being mandatory. In terms of mode of spends on CSR activities, 286 companies directly spent a sum of ₹5,206.27 crores, while 283 companies used implementing agencies to deploy ₹4,185.29 crores, and 111 companies deployed ₹222.8 crores without specifying the mode of CSR spends. Whereas, 451 companies spent directly as well as through implementing agencies, an amount of ₹2,346.02 crores on their CSR initiatives. With this uprise in awareness of aiding the society for a better social, economic and healthy environment, we certainly believe that India is moving in the right direction of encouraging citizenship in the corporate world.

Please leave a comment below to share what you feel about the CSR ecosystem in our country.